Those who settled in this area developed into the Lenni Lenape Native Americans. About the year 1000, an agricultural society developed, and small villages dotted what was to become New Jersey. The Lenape began a westward retreat in the face of European settlement and disease beginning in the late seventeenth century, beginning in Monmouth County by the mid-eighteenth century. Although the Lenape presently live in Ontario and Oklahoma, their legacy survives in such names as Mohingson, Luppatatong and Matawan Creeks and Raritan Bay. 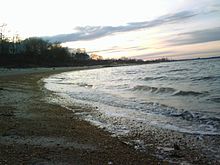 Cliffwood Beach, located in Aberdeen Township, was a popular resort until Hurricane Donna destroyed its boardwalk.

The earliest known attempt at European settlement was in 1650 when the south side of Raritan Bay was purchased from the Lenni Lenape by the New Netherland Colony. The Dutch failed to make any permanent settlements of this area.

The earliest English land grant in Aberdeen was in 1677 when Sir George Carteret granted 36 acres (150,000 m2) to Jonathan Holmes.[20]This is in present-day Oakshades on Mohingson Creek.

Aberdeen Township derived its name from "New Aberdeen," a name for a settlement established in Northwestern Monmouth County in the 1680s by Quakers and Presbyterians who fled Scotland to avoid religious persecution.[21]

In 1684, Surveyor General Thomas Rudyard received a grant of 1,038 acres (4.20 km2) on Raritan Bay and Matawan Creek, the present location of Cliffwood and Cliffwood Beach.[20] Owing to Rudyard's high office, this was quite controversial, and in 1685, the Board of Proprietors issued an order regarding the laying out of land. Section 7 addressed questionable activity such as Rudyard's, and he sold his land to his son-in-law, Samuel Winder.

The 1680s saw an influx of Scottish immigrants fleeing religious persecution in response to a 1683 book by George Scott extolling the virtues of Scottish settlement in East Jersey. In 1701, a village site of 100 acres (0.40 km2) was granted by the Proprietors to 24 Scottish settlers of the area. These men and six others also purchased a landing site on Matawan Creek. The village site eventually came to be called Mount Pleasant, and the landing, as it became an important shipping point for the produce of Middletown Township, became Middletown Point. A third, very scattered settlement developed in the eighteenth century west of Matawan Creek, and was called Matawan or Matavan.[22]

In 1693, what was to become Aberdeen Township became part of Middletown Township which, at the time, consisted of what is now Aberdeen, Holmdel Township, Hazlet Township, Middletown (including Sandy Hook), Matawan Borough, Keyport, Union Beach, Keansburg, Atlantic Highlands, Highlands and a sliver of Colts Neck Township. A portion of the township that extended as far northwest as Cheesequake Creek, was ceded to Middlesex County in 1710.[23]

Middletown was considered too large and unwieldy, and legislation was passed in February 1848 that took the western half of Middletown Township to create a new municipality, Raritan Township (now Hazlet Township).[24]

Legislation sponsored by Assemblyman Beers passed the State General Assembly and Senate, was signed by Governor of New Jersey William A. Newell, and on February 23, 1857, Matavan Township was incorporated from portions of what was then Raritan Township.[23] This included the village of Middletown Point, Mt. Pleasant, and Matavan. The Township was named for the creek as well as the village of Matavan. The spelling of "Matawan" or "Matavan" had been interchangeable, however, when the act was published "Matavan" had been used, which may derive from a Lenape word meaning "where two rivers come together".[25] It may also originate from the Southern Unami Matawonge, "bad riverbank" or "bad hill", a possible reference to bluffs along Raritan Bay which were subject to erosion and collapse prior to the construction of a seawall in the 1970s. Another possible source is Matawan, Northern Unami for "bad fog", which may have referred to fog generated on Raritan Bay.[26]

In 1865, due to postal confusion with Middletown, the Middletown Point post office was renamed "Matawan", to reflect the name of the Township. This section is the present downtown area of Matawan Borough. In 1882, the spelling of the Township was officially changed to "Matawan".[23]

A small railroad station was erected along the New York and Long Branch Railroad tracks at a point called Hutchler's Crossing in 1875. Soon known as the Cliffwood Station, it operated on Cliffwood Avenue until the station closed in 1932.[27][28]

In response to demand, a post office was established at Mount Pleasant in 1889. As that name was in use elsewhere, a new name was needed. "Freneau" was chosen, in honor of Philip Morin Freneau, the "Poet of Revolution," and a former Mount Pleasant resident who is buried in the area.[29] This post office has since been closed.

Cliffwood Beach, formed in the 1920s, was originally a resort community until after World War II when year-round homes were the norm. River Gardens developed in the late 1940s. Strathmore was developed in the 1960s, adding suburban development to the community and doubling the Township's population.

On November 8, 1977, the residents of Matawan Township voted to change the name of the Township to create a community identity separate from that of Matawan Borough. The residents voted to call their community Aberdeen Township.[30] Officials believed the new name would draw attention to the Township, as it is listed first alphabetically among New Jersey's municipalities.

The Henry Hudson Trail is a 9-mile (14 km) paved trail built on a former Central Railroad of New Jersey right-of-way and extending from Aberdeen Township east to Atlantic Highlands.